We found our beautiful house near Pahoa in February. As soon as we got back to Tokyo we started on the tedious process of getting the cats processed through quarantine, which is misnamed since, if you get all the paperwork right, there’s no actual quarantine involved. What you do have to do, however, is ferry the cats back and forth to the vet so that they can be vaccinated against rabies. There’s no rabies in Hawaii, you see, and understandably they don’t want rabies. But the thing is, there’s no rabies in Japan either. There have been no actual sightings of rabies since 1956, which makes rabies only slightly more common than Yeti.

Still, the cats went to the vet for not one but two vaccines against a disease they didn’t have, to make sure they couldn’t get it. Then we had to have them each blood tested to prove they didn’t have a disease they couldn’t get because they were vaccinated against it. Then we had to wait six months to make sure they didn’t get the disease they were vaccinated against and couldn’t get in the first place. That’s the rule, no exceptions, except Guam and New Zealand. (Don’t ask me why. I stopped asking why a long time ago.) If you want to bring your animals into Hawaii you will do all of that, humbly, and pay the gazillion yen and dollars it all costs, because they’ve got you by the short and curlies.

At Narita airport, we had to go through exit quarantine where they very carefully crossed all the I’s and dotted all the T’s, and, with tears in our eyes, we watched a man wheel them away into airport oblivion. Fortunately, we had the help and support of the sainted Jim Weatherford, for which I can name no price.

When we arrived at Honolulu, we were told to go to quarantine after customs and immigration because, unfortunately, they still don’t issue passports for cats. We found a shaded loading dock with some seats where Rochi could wait with our masses of luggage while I sprung the little ones.

The man behind the locked door and plexiglass partition asked for my paperwork and took his time checking all the details, even though the quarantine office had cleared us months before. All he had to do was confirm the final health check form, painstakingly provided in English by our vet. I gave him all the papers and he scowled, saying, “Where’s the health check form?”

“Right there in your hand,” said I.

“It has all the information you need on it, vaccination dates, blood test dates, antiparasitic treatment.”

I looked at the remaining ream of documents in my hand and knew I had nothing more to offer him.

All six feet of him looked down at me.

All five feet of me looked up at him.

“Seriously? You want to quibble over one word, when you know we’ve done everything exactly as we were told to do it. You know we just got off an international flight and are exhausted, with another flight ahead of us before we’ll finally be home, and what an unbelievable mess it would be if we had to come back another day to pick them up. You of all people ought to understand what clearing this process entailed and that all we want is to get their terrified little souls out of here and safely home with a minimum of trauma, you mealy-mouthed, pencil-pushing, petty-minded…”

…was what I wanted to say, but instead I just looked at him.

After what felt like several eternities, he tossed his curls across his shoulder, sighed in mock exasperation, and said, “I’ll ask. I doubt they’ll go for it, though.”

And he sat at a desk, dialed a phone, chatted and laughed, while I stood in the stuffy, humid entrance area, unpleasantly cold air conditioned air blowing at me from the little slot for passing papers through the plexiglass that separated us.

Several more eternities passed and he came back, saying, “They decided to allow it…grudgingly.”

“Grudgingly? GRUDGINGLY??? Are you freaking kidding me? Exactly what did I do to cause anyone to hold a grudge? Where is your professionalism? Your job is to check the documents, which are all in order, and give me my cats. Nothing more, you sniveling little weenie….”

Airline rules dictated that Twitchy and Monkey Boy ride in the cabin with us for the flight to Hilo, which meant we had to get them through security, and that meant taking them out of their carriers and taking them through the metal detector while their carriers were x-rayed for guns or drugs or pygmy elephants or whatever else they thought we might be hiding. Oddly, nobody questioned the catnip toys I’d put inside, but maybe they’re only considered drugs in certain feline mafia circles.

So we stood there in our socks, having our palms swiped, Rochi with his pants hanging halfway down his thighs because they suspected his belt buckle of subversion, each of us holding a trembling animal and eager to be done with the whole business. Rochi was a little confused about the meaning of the little paper they swiped our fingers with and offered Monkey’s paw to the uniformed officer. “No, no,” she said. “Your paw.” Kudos to the security people for trying to be helpful while not cracking a smile.

At long last, we made it to the departure lounge, where we watched poor little George board all by himself. We were too numb to even cry.

But we made it. We’re home. Mr. Obnoxious von Snippybritches can go suck on rotten pineapples for all I care. I’ll never understand why some people find satisfaction in power harassment. It comforts me to know he’s damaging his own karma much more than he damaged mine. 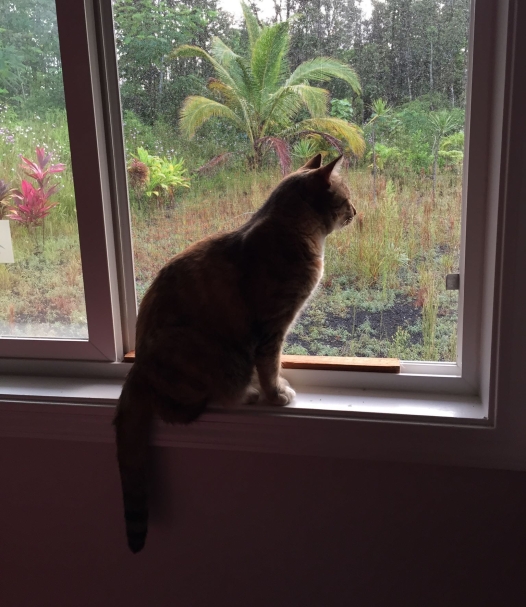 View all posts by bigislandmouse

8 thoughts on “The Obnoxious Quarantine Dude”