I was noodling around the Interwebs and discovered that just down the road a bit, the Nanawale Estates VFW was having a breakfast this morning. The very thought brought back wispy childhood memories of church dinners and barbecues at the Community Grove. This was an ideal opportunity to combine my enduring love of going out for breakfast with doing something good for the community. It was also very high on the list of things I never thought I’d do and I revel in new experiences.

Arriving at the VFW, we were given a warm greeting by Commander Deb and then piled up our plates: French toast, hash browns, scrambled eggs with cheese, sausage and fruit cocktail fresh from a can. (Ahem.) Eight dollars well spent. That was at 9:30 this morning; it’s after 3:00 now. I’m still not hungry. 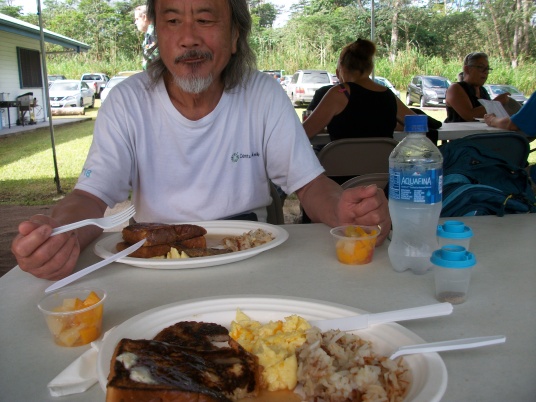 As I stuffed myself with this bounty, I soaked up the conversation around me. There was a group of men discussing the horrible treatment they’d received from veteran’s hospitals. The one sitting closest to me said he had served 26 years, had seen two wars, and was treated like trash by hospital administrators. This is the treatment they get after willingly putting their lives on the line? How can that be true when we are sitting in breezy sunshine, eating good food, listening to birds sing?

I was feeling the warmth of human connection, empathy, the shared pain of lasting scars, the challenges we all find a way to survive, when one of the guys made a joke about how he had once been married and that was worse than anything else. They all laughed, belly laughs, guffaws. I felt my empathy drain away. I knew they were just being guys, needing that twisted machismo that seems so important to men but only thinly veils their pain. I didn’t have the energy to respond so I pretended not to have heard.

There was an artist at the farmers’ market who had a similar effect. His detailed freehand line drawings of Hawaiian plants and birds and ocean creatures were so full of life, I was considering buying one. Then I noticed he was working on a drawing of a sub-machine gun, a solid, metallic symbol of death. I nearly gasped. If he truly wanted to alienate me, he could have drawn disemboweled kittens, but the gun was effective enough. I sighed and moved away.

After so many years in my Tokyo oyster shell, I feel disconnected from who I once was. These moments of interaction with others help me define who I am becoming, help me learn to trust my instincts, my intuition. Each day feels as if my heart is pumping moments of other people’s lives through my own veins, absorbing their realities and perspectives, finding strength and wisdom from both their sameness and their difference. In a sense, I am rediscovering myself, finding me in others, finding me in me.

View all posts by bigislandmouse